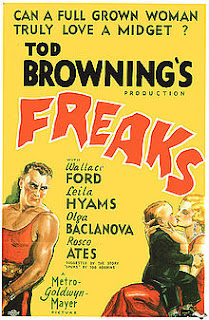 That said, there are some that filmmakers don't even dare to top. One such film is Tod Browning's Freaks. The fact that no one had even thought of remaking it shows the film's impact. The fact this was made back in 1932 makes it all the more shocking.

Browning (who directed Dracula the year before) knows how to captivate his audience. How so? Simple: he takes a story commonly found in most films and gives it a surreal take on it. Think of it as Double Indemnity set in the circus.

The most curious factor of Freaks is that the freaks in question aren't the people who allow themselves to be put on display because of their deformities. The freaks are actually trapeze artist Cleopatra (Olga Baclanova) and her strongman lover Hercules (Henry Victor). That's because Browning makes the "freaks" human and glorifies the bad traits within Cleopatra and Hercules. It's a clever move by him.

Freaks is, well, a freaky film. Just watching it shows why it got so much controversy eighty years ago and how it shocks today. Finally, a film Hollywood doesn't even dare to remake. (You never see those nowadays. Never.)