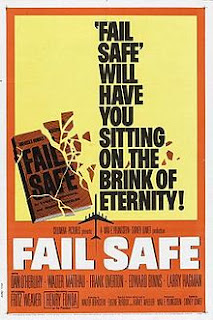 It has become somewhat expected for two films of a similar subject to be released the same year. In 2006, it was The Prestige and The Illusionist. In 1998, it was Saving Private Ryan and The Thin Red Line. Hell, it happens all the time.

It even happened back in 1964. Two films about the fear of impending  nuclear war were released. Both were made by prominent directors each with six films under their belts. The manner of how the subject was handled is where the similarities end. One is a comedy while the other is much more serious. If you didn't figure it out by now, the comedy is Stanley Kubrick's Dr. Strangelove.

But what's the other film, the one that went down the serious route? Well, that one is Sidney Lumet's Fail-Safe. (If you're wondering, Dr. Strangelove was released first.) Along with the way the subject of nuclear warfare is handled, the pacing of both films is different. Kubrick's film moves at a much more quicker pace than Lumet's film, which is sort of the main flaw of Fail-Safe. (It's not exactly the suspenseful pacing of 12 Angry Men.)

The cast is quite good, especially when you have the likes of Henry Fonda and Walter Matthau among it. (There's also good work from a young Larry Hagman, years before Dallas.) The claustrophobic cinematography by Gerald Hirschfeld is a very nice touch as well.

Fail-Safe is good though I wouldn't rank it among Lumet's top five best films. (Top ten, perhaps. Top fifteen, more likely.) The suspense doesn't particularly deliver, but the story is pretty good. All in all, it's worth a look. (Oh, and Dr. Strangelove is the better of the two.)