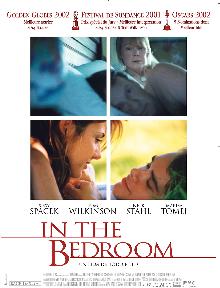 It's hard to depict domestic life without overdoing it. (Sometimes domestic life is overdone in life itself.) It's even harder to depict it when its equilibrium becomes askew.

Todd Field, however, did it with ease for his debut In the Bedroom. Following a personal tragedy, Matt (Tom Wilkinson) and Ruth Fowler (Sissy Spacek) try to carry on with their lives. But as time slowly wears on, their grief shifts to anger.

Both Wilkinson and Spacek are fine actors, and In the Bedroom displays their skills. They don't overplay the grief within Matt and Ruth as any inexperienced actor might do. They instead have their characters cope with their loss with quiet composure.

In a similar vein to Who's Afraid of Virginia Woolf? thirty-five years earlier, In the Bedroom depicts domestic life on the breaking point. (There's much less alcohol, mind you.) A once-loving couple's lines of communication become frayed thanks to an incident that happened during their marriage. But at least Matt and Ruth have a better chance than George and Martha.

In the Bedroom contains some fantastic work from Wilkinson, Spacek and Marisa Tomei. The pacing can be problematic at times, but no matter. Just let Field's direction do wonders on screen. Wonder if Little Children is like this...

My Rating: ****1/2
Posted by MovieNut14 at 10:37:00 PM
Email ThisBlogThis!Share to TwitterShare to FacebookShare to Pinterest
Labels: 2000s, movies, reviews