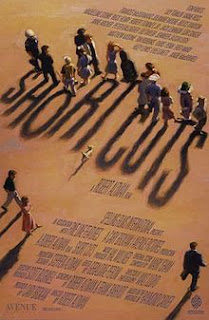 If there's one thing Robert Altman was guaranteed to do with his films, it was to get most out of his actors. Whether it be a single actor-driven film or one with an ensemble cast, he always got memorable performances from them.

Such is the case with Short Cuts. With twenty-two major characters, Altman knows how to give each of them the right amount of time on screen. (Always trust a director who has that ability.)

Based on Raymond Carver's short stories, Short Cuts provides a glimpse in the lives of several California residents. Some regular, some tragic, some bizarre, all compelling. And yet, this is Altman's work, not Carver's.

As expected from an Altman film, the cast is lovely. The names include Oscar nominees (and a few winners), character actors and a few musicians. It seems cruel to pick favorites among them, but I am partial to Jack Lemmon (for his confession on why he cheated), Julianne Moore (for her confession on why she cheated), Jennifer Jason Leigh (for what she does in front of her children and neglected husband) and Robert Downey, Jr. (for his slightly erratic behavior). Again, it's cruel to pick favorites from a cast like this.

Short Cuts is a very interesting character study. It's not that often you find a film this compelling in both acting and story. Seriously, this is definitely one of Altman's best. (Alongside Nashville and The Player without a doubt.) If you're in need of an excellent contemporary film, Short Cuts is what you're looking for.