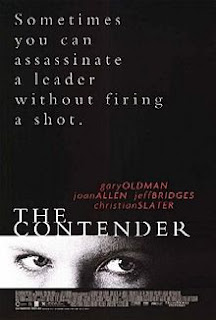 There's always tension within politics. (This has been made very evident within the last few weeks.) Dirty secrets are aired to the public, everything becomes scrutinized by the press, and candidates have to watch what they say. Hey, nobody said politics were a friendly matter.

Rod Lurie's The Contender provides such a portrait of nasty politics. Many people support President Jackson Evans' (Jeff Bridges) nomination of Laine Hanson (Joan Allen) as Vice President, but not everyone in the White House likes his decision. They find something suspicious about the clean-cut senator...

What makes The Contender interesting is its examination of the status of the sexes in society. (The one irksome detail is that some of the matters discussed are still being debated twelve years later.) If what Hanson was accused of happened to a man, they'd likely get a slap on the wrist. Yet if it's a woman, it becomes an unwanted persecution of her morals. Society, you're fucked up.

The actors are great. Along with Allen and Bridges, the film also has good, sleazy work from Gary Oldman and Christian Slater. (Seriously, how does Oldman not have an Oscar yet?) Sleaze and politics: two things that strangely go hand in hand, both in Hollywood and real life.

The Contender is probably one of the better titles of the last decade though it is a little spotty in some scenes. Allen, Bridges, Oldman and Slater all give top notch performances, and Lurie's script is pretty darn slick. Also, isn't it a tad ironic that the Republicans are viewed as the villains here?

My Rating: ****1/2
Posted by MovieNut14 at 9:38:00 PM
Email ThisBlogThis!Share to TwitterShare to FacebookShare to Pinterest
Labels: 2000s, movies, reviews