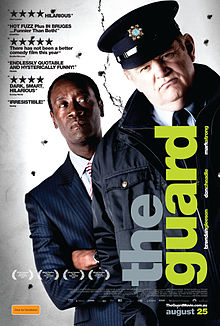 When we first see Sgt. Gerry Boyle (Brendan Gleeson), it's clear that he's a man who goes by his own rules. That said, he still gets the job done even if he does seem unorthodox for the job.

John Michael McDonagh (brother of In Bruges director Martin McDonagh) directs Gleeson in perhaps his best work to date. As Boyle, Gleeson enforces authority while at the same time goes against it. Think of Boyle as a Scorsese-like protagonist.

Amusingly, Gleeson here is much like his role of Ken in In Bruges. He's seen so much wrong happening in the society he lives in, he just doesn't care anymore. It's pretty much a routine of "Fuck it" and "Let's get it over with" every day for him. (Come to think of it, aren't we all like that some days?)

The supporting actors are quite good. The more recognizable names, Don Cheadle and Mark Strong, are also the MVPs for the supporting roster. But this is Gleeson's show without a doubt. It's hard to upstage him to be honest.

The Guard, like In Bruges, shows the quirky (and often violent) side of the criminal life. Gleeson is great in not giving any fucks. (Then again, any actor who can do that on an entertaining level is usually a good thing.) If Tarantino or Scorsese were Irish, The Guard is the kind of film they would make.

My Rating: ****1/2
Posted by MovieNut14 at 10:05:00 PM
Email ThisBlogThis!Share to TwitterShare to FacebookShare to Pinterest
Labels: 2010s, movies, reviews