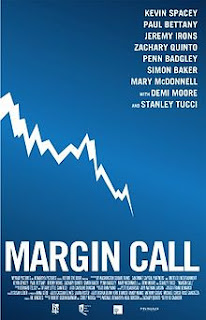 Hollywood always manages to keep up the times. When World War II broke out, they made films about life on the home front. During the Cold War, science fiction films were thinly veiled attacks on communism. And after 9/11, there were a number of films dealing with terrorism and the politics behind the event.

Amusingly, Hollywood is quite concerned when it comes to the stock market. (Take note that one of the big films of 1987, the same year "Black Monday" occurred, was Wall Street.) Recently there have been a number of films revolving around the effects of the recession, job losses and the economy in general.

One such film is J.C. Chandor's Margin Call. Set before the beginning of the 2008 financial crisis, the film chronicles a tense time for a lone investment firm. You can just feel the immense pressure the investors are feeling.

For a film by a first-time director, the cast is one for the ages. The names include Kevin Spacey, Zachary Quinto, Paul Bettany, Stanley Tucci, Simon Baker, Demi Moore and Jeremy Irons. Honestly, the people attached to this film are some of the best working today. You only see a cast like this one every now and again.

Margin Call is good for many of its scenes but alas, it falls in the others. The reason? The supposed suspense doesn't deliver nor build up during those scenes. Still, Chandor got some very good work from his actors (my favorites were Spacey, Quinto and Bettany) and that script of his is damn good. Slow in spots, but I have hope for Chandor.

My Rating: ****
Posted by MovieNut14 at 11:50:00 PM
Email ThisBlogThis!Share to TwitterShare to FacebookShare to Pinterest
Labels: 2010s, movies, reviews