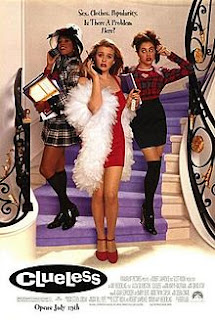 Apparently the 1990s saw a number of re-tellings of classic literature. Dangerous Liaisons became Cruel Intentions, The Taming of the Shrew was turned into 10 Things I Hate About You, and Richard III was moved to 1930s Britain. But it wasn't just long-dead male authors who were subjected to this treatment.

Jane Austen's Emma got turned into Amy Heckerling's Clueless and even with nearly two hundred years between the two works, it surprisingly works well. Granted, it hasn't entirely well in the twenty-one years of its existence but the film still has its charms. (What else does one expect from a title that influenced the remainder of the 1990s?)

It's not likely that Austen would've approved of her satire being moved to Beverly Hills and having its protagonist be a touch more self-centered than what Emma Woodhouse was initially. Still, Cher Horowitz (Alicia Silverstone) keeps her wits about her and like Emma, she gets a little too involved in her matchmaking. (See? This sort of thing existed before internet culture.)

Though it may have been fine back in 1995, there are some aspects of Clueless that may not work as well nowadays. At one point, Cher tries to pursue a guy who's not interested in her in that way. (One's identity is not a punchline!) And then there's Tai Frasier (Brittany Murphy) talking about a near-death experience...

Clueless is cute, no denying that. And intentional or not, it shows its age a lot. (And the final third is kinda creepy.) At least it's funny enough to make it passable (even if it is grating in spots).

Posted by MovieNut14 at 10:43:00 AM
Email ThisBlogThis!Share to TwitterShare to FacebookShare to Pinterest
Labels: 1990s, directed by women, movies, reviews