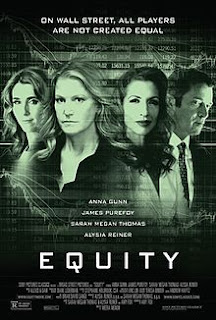 Wall Street. The Wolf of Wall Street. The Big Short. These three films have one similarity: they're all male-led films about the business world. Of course despite their quality, their sense of having well-written female characters is basically nonexistent. After all, there are women that work in this field.

Thankfully Meera Menon rectifies that with her film Equity. Gone are the women who play only a meager role in fiction of this nature. Menon ensures that they're as third-dimensional and diverse as what Oliver Stone, Martin Scorsese and Adam McKay had with their respective films.

Leading the pack in Equity is Anna Gunn, best known recently for Breaking Bad. Like she did with her Emmy-winning performance, she provides an intensity within a dog-eat-dog world. It's survival of the fittest on Wall Street, and every day claims a new victim.

Speaking of which, Equity continues the tradition of depicting the business world as cutthroat and merciless. It's the kind of environment where ingenious thinking at a fast pace is very crucial. In a way, the film borrows several tropes from various noirs and turns them on their head.

Equity is one of several titles that shows women aren't afraid to tackle meatier subjects. (Who says they're only interested in the light and fluffy stuff?) Between this and Breaking Bad, Gunn should be a more in-demand actress. Hopefully that'll shortly change.

My Rating: ****
Posted by MovieNut14 at 10:54:00 AM
Email ThisBlogThis!Share to TwitterShare to FacebookShare to Pinterest
Labels: 2010s, directed by women, movies, reviews