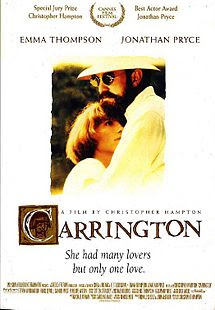 "Who on earth is that ravishing boy?" This question escapes Lytton Strachey's (Jonathan Pryce) lips upon first laying eyes on Dora Carrington (Emma Thompson). (He's quickly disappointed.) Carrington (which she prefers to be referred as) herself laments about being a woman. What follows in Christopher Hampton's Carrington is a true story of deep devotion.

Carrington is a love story of the non-physical variety. (Strachey was gay and there were implications that Carrington was bisexual or even a lesbian.) Incompatible sexual orientations aside, the writer and the painter had a bond that transcended friendship. (See? Such a thing does exist.)

While Strachey's work was known during his lifetime, Carrington -- much like Vincent van Gogh before her -- became prominent in the years after her death. But their success isn't the whole point of the film. What mattered more to them was the other's well-being.

Also shown throughout Carrington are the sexual politics of the time. Both Strachey and Carrington were members of the Bloomsbury Group (it's briefly alluded to at the beginning of the film), which rejected the social norms of the Victorian era. They were part of a group that influenced the rest of society.

Carrington focuses on two forgotten names of British culture, and Hampton has them come alive again decades after their deaths. The performances from Thompson and Pryce show the dynamic between this odd couple and how their lives became interwoven. It's a bond that stays united in this life and the next.

My Rating: ****1/2
Posted by MovieNut14 at 10:51:00 AM
Email ThisBlogThis!Share to TwitterShare to FacebookShare to Pinterest
Labels: 1990s, movies, reviews