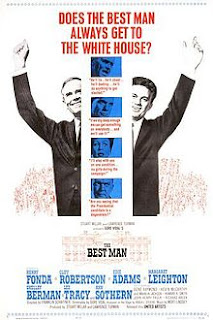 Franklin J. Schaffner's The Best Man has its opening credits superimposed on images of all the United States Presidents up until the then-current one in office. (Being a film penned by Gore Vidal, it was probably his idea.) What ensues in Schaffner's sophomoric film shows that very little has changed since its 1964 release.

Apparently Vidal had enough insight that there's an absurdity within politics. In the fifty-two years following The Best Man hitting theaters, reality starts resembling fiction to a nigh unsettling degree. (Good thing Vidal isn't around to witness this current election otherwise that would've surely killed him.)

Similarly, Vidal managed to foretell the future of American politics. At one point in The Best Man, Art Hockstader (Lee Tracy) talks about the possibilities of a Jewish President, a Negro President and even a woman President. (It's worth mentioning that Vidal lived to see Barack Obama become President.)

And of course the characters of The Best Man were inspired by real-life politicians. William Russell (Henry Fonda) is based on Adlai Stevenson II while Joe Cantwell (Cliff Robertson) was inspired by Richard Nixon, John F. and Robert Kennedy, and Joseph McCarthy. And Hockstader is a mix of Dwight D. Eisenhower and Harry S. Truman. (Worth mentioning that Vidal wasn't too fond of some of them.)

It's unsettling how much The Best Man parallels the present election. So much focus on the mudslinging between the candidates and not enough on their policies. Hopefully Vidal's not currently turning in his grave.

My Rating: ****
Posted by MovieNut14 at 11:48:00 AM
Email ThisBlogThis!Share to TwitterShare to FacebookShare to Pinterest
Labels: 1960s, movies, reviews