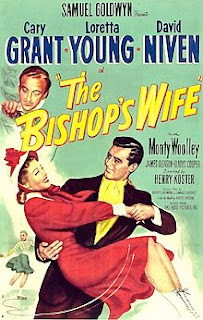 Henry Koster's The Bishop's Wife opens with Dudley (Cary Grant) walking among the many Christmas shoppers, committing small good deeds as he passes them. Then he notices Julia Brougham (Loretta Young) gazing at a shop widow, and later on in the film they're introduced properly.

It turns out (as the title implies) that Julia's husband Henry (David Niven) is a bishop and he's trying to raise funds for a new cathedral. Henry prays for spiritual guidance, and enter Dudley. Why him? He's a guardian angel, that's why.

Released the same year as Miracle on 34th Street (and the year after It's a Wonderful Life), The Bishop's Wife is easily one of those films that you could get comfortable with during the the Christmas season. You know, the one you can watch either by yourself or with the family once the frenzy of the holiday season starts to die down. (And honestly, there's no better remedy for the holiday woes than a movie.)

The trio of Grant, Young and Niven is what makes The Bishop's Wife work so well. (To think the original cast would've featured the likes of Niven, Teresa Wright and Dana Andrews.) The charm of the actors are brought out to the fullest. (What else would you expect from the future director of Harvey?)

Anyway, The Bishop's Wife is deeply endearing, exactly the kind of film one needs during the holiday season. It's gotten lost in the shadow of It's a Wonderful Life and it deserves a re-discovery. Honestly, it does.