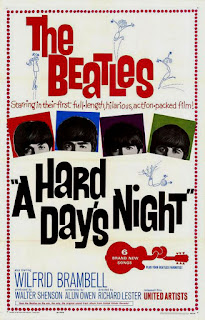 Everyone knows how Richard Lester's A Hard Day's Night opens. A throng of screaming fans are chasing the Beatles as they try to get to their train. Given this was made during the height of the band's fame (it was made shortly after their appearance on The Ed Sullivan Show), it wasn't too hard to find extras to do the task. But there's so much more to the film than the opening sequence.

From an era with ever-changing opinions on next to everything, A Hard Day's Night is a testament to its era. This was a time in history where its target audience were the baby boomers, a generation more liberated than the previous one. This was a generation seeking its own identity and what better form of identity is there than music?

As you watch the Fab Four on screen, you can't help but be surprised that A Hard Day's Night had a script. (An Oscar-nominated one too!) Of course the quartet are playing exaggerated versions of themselves but does that matter in the end? Of course not. But to choose which of the four steals the show, that honor easily goes to John Lennon. ("I now declare this bridge...open!")

That said, there are a few elements in A Hard Day's Night that wouldn't go by as easily as they did in 1964. At one point in the film, Ringo Starr temporarily leaves the band which he would do several years later. (And then there's the manager repeatedly threatening to kill Lennon...) That said though, the looming shadows of those events don't hinder the film's quality.

My Rating: *****
Posted by MovieNut14 at 10:25:00 PM
Email ThisBlogThis!Share to TwitterShare to FacebookShare to Pinterest
Labels: 1960s, movies, reviews