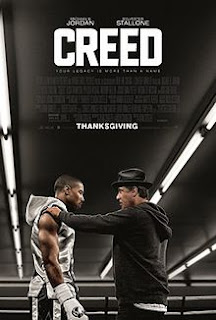 In the society we're a part of, it's hard to find something original to enjoy. Television shows based on movies, books being adapted into movies and television shows...it's almost as if we've run out of ideas. However, exceptions can be made for matters like this.

Remakes and reboots primarily can only work if a new angle to the original story is there. So how has Ryan Coogler's Creed fared? Taking elements from the six Rocky films, Creed both adds to the franchise's legacy and stands out as its own film.

In sharp contrast to his previous film Fruitvale Station, Coogler takes on a film with more aggression and violence. (Well, it is about boxing.) But Coogler also explores similar themes from his first film, such as doing what's right and making a better future. (Will these be recurring themes in Coogler's future films? Time will only tell.)

And the performances Coogler got out of his actors are great. Michael B. Jordan (who also starred in Fruitvale Station) continues to prove he's an actor to an eye on. Tessa Thompson (who's also great in Dear White People) does much of the same thing. And then there's Sylvester Stallone. This is a role he first did thirty-nine years ago and his work here proves he's still got it.

Creed is one of those films that you think would just be all right but it turns out there's much more to it. Thanks to the work from Coogler, Jordan, Thompson and especially Stallone, this is proof that we're witnessing a new film revolution. (That last scene in particular is proof that Coogler is going to have a long and fruitful career.)

My Rating: *****
Posted by MovieNut14 at 11:24:00 PM
Email ThisBlogThis!Share to TwitterShare to FacebookShare to Pinterest
Labels: 2010s, movies, reviews