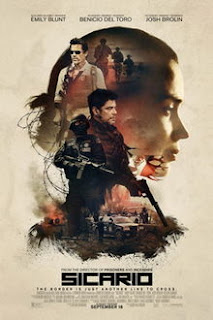 Over the last thirty years or so, Canadian filmmakers have made themselves known in Hollywood. David Cronenberg, Guy Maddin, Sarah Polley...these are just a few names that hail from there. There have been other directors making names for themselves in recent years (Xavier Dolan, Jean-Marc Vallee), and the list keeps growing.

Another name on that list is Denis Villeneuve. Recently he has garnered acclaim for films like Prisoners and Enemy. So how does his latest film Sicario fare (and compare)? Well, like his last two films, Villeneuve paints a portrait of humanity's dark side and this one is decidedly way more violent.

There's something amusing in that the director of Sicario and its two best stars hail from outside the United States. Emily Blunt has certainly made a name for herself in the last few years and with her work in Sicario, it won't be much longer until she's more in demand. Benicio del Toro, already a well-established name (he has an Oscar, after all), spends many of the scenes he's in not drawing attention to himself...at first. Then all eyes are on him. (Could Oscar nomination #3 be around the corner?)

And from a visual standpoint, Sicario is pretty stunning as well. In a way reminiscent of Michael Slovis' work on Breaking Bad, Roger Deakins captures the mood of the film with the use of shadows and vivid colors. (How Deakins still hasn't won an Oscar is anyone's guess.) The bright colors provide a sort of dissonance  to the overall tone of the film. (Not that it's a bad thing.)

Sicario is a very well done and intense film, thanks primarily to the work from Blunt, del Toro, Villeneuve and Deakins. That said, however, Sicario isn't 100% solid. It lingers too much on corruption in the system during a majority of scenes. Apart from that, it's proof that Villeneuve will be working for a long time.