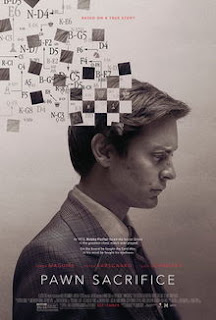 It's established early on in Edward Zwick's Pawn Sacrifice that Bobby Fischer (Tobey Maguire) is not of sound mind. The work from the sound department amplifies Fischer's mental state. Innocuous noises become louder. A non-existent hum over the phone makes its presence known. What went through the chess prodigy's head?

It's not just from an auditory standpoint where Pawn Sacrifice excels. The set design of the film is full of fine detail that would make the production designer of Mad Men green with envy. Whether it be the clothes the characters wear or props within the various sets, it looks like a product of the era it's set in without being kitschy.

And all of it is captured by the observant eye of Bradford Young. As proven by his work in Selma and A Most Violent Year, Young focuses on more than just who's in the scene; he focuses on their tics. A shift of the eye, the wringing of hands...Young lingers on these flawed people.

Through Steven Knight's script, there are consistently solid performances throughout Pawn Sacrifice. Most of the attention is on Maguire and his portrayal of Fischer, and it's hard to dispute why that is. (One thing's for certain: he has come a long way since his Spider-Man days.) And alongside Maguire are strong supporting performances from Peter Sarsgaard, Michael Stuhlbarg and Lily Rabe.

Pawn Sacrifice is very solid throughout though there's something about the film that stops it from being great. Perhaps it has something to do with Zwick's involvement. Yes, he directed The Last Samurai and Blood Diamond but Zwick has his flaws as a director. Still, he does provide a few good moments in Pawn Sacrifice.

My Rating: ****1/2
Posted by MovieNut14 at 5:34:00 PM
Email ThisBlogThis!Share to TwitterShare to FacebookShare to Pinterest
Labels: 2010s, movies, reviews