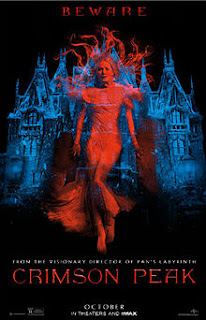 Guillermo del Toro's Crimson Peak is unlike most other films you'll see this autumn. It's a film that has an atmosphere unlike what you normally see at the cineplex. (Then again, this is something from the mind of del Toro, so it's not too much of a shock.)

At first glance, Crimson Peak appears to have the decorum of Jane Eyre (fitting considering one of the stars) and the ambiance of Hammer Films-produced titles. But as the film unfolds, it's clear there's so much more to it.

Indeed, many elements of Crimson Peak pay homage to numerous films of a similar nature. (Rebecca and The Shining come to mind.) del Toro makes various references to horror films from throughout the years. (Come on, the main character's surname is Cushing.) Many other films of this nature resort to blatant spoofs of famous works; Crimson Peak, however, prefers the subtle approach.

And it's not just the homages that make Crimson Peak work wonders. The production design gives the viewer a glimpse into del Toro's imagination. (The decrepit walls of Allerdale Hall would make Edgar Allan Poe proud.) The combination of Dan Laustsen's cinematography and Fernando Velázquez's score turn the film into a dreamy nightmare. And the performances from Mia Wasikowska, Tom Hiddleston and especially Jessica Chastain would make the likes of Charlotte Brontë and Daphne du Maurier very happy.

Crimson Peak is a very effective film. It has the right amount of scares, nothing overdone. Its many details result in something that's not only a tribute to Gothic romance but also a gorgeous piece of cinema. So many beautiful details....