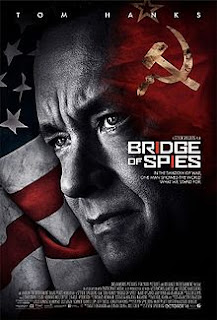 For decades, Steven Spielberg has been a very prominent name in Hollywood. Ever since his big break with Jaws forty years ago, he has dabbled in various genres from war to historical drama to adventure. And while he has had a few misfires throughout his career, Spielberg has always been consistent in entertaining his mass audiences.

So how has he fared with his latest film Bridge of Spies? It's certainly clear that he's back since his last film Lincoln three years ago (which finally earned one of his actors an Oscar). But how does it compare to the likes of Schindler's List and Saving Private Ryan?

Indeed, Bridge of Spies is dark for a Spielberg film but bear in mind it was co-written by the Coen brothers. (If you pay close attention, you can tell which bits were written specifically by them.) But then again, this is a film set during the Cold War. You can't exactly be lighthearted about this particular time in history. (Well, you could try but not many people would like it.)

And the many aspects of Bridge of Spies are worth mentioning. The performances from Tom Hanks and Mark Rylance, the cinematography from Janusz Kaminski, the score from Thomas Newman, the set design by Adam Stockhausen, Rena DeAngelo and Bernhard Henrich...all of these things Bridge of Spies resonate on the screen.

Bridge of Spies is another success for Spielberg without a doubt. All of its fine details are like a well-tuned machine, each part functional on its own but does wonders when combined. Suffice to say that Bridge of Spies is a film you need to see, preferably on a big screen to appreciate those details.