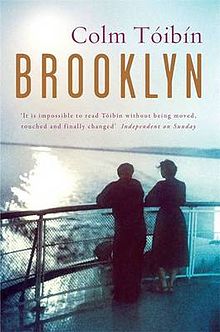 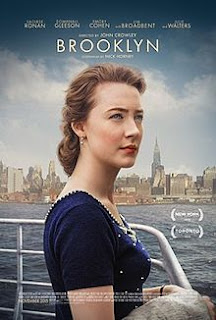 Whenever coming of age is dealt with in fiction, more often than not it involves losing one's virginity. Is that the image we want to project onto impressionable minds? That you're not your own person until you go to bed with someone? Obviously, that's bullshit and thankfully other writers have taken note of that as well.

Novels like The Bell Jar and The Perks of Being a Wallflower and films like Almost Famous and Boyhood show coming of age without the need of sex. (Well, some of those feature sex but it's not the main point of the story.) One of the more recent titles to focus on the matter is Brooklyn. Focusing on a girl from Ireland moving to New York City, it's an enchanting story chronicling an awakening in the early 1950s.

Colm Toibin's novel is a simple piece of literature but Toibin writes poetically. He's not interested in villains or any wrongdoings towards his lead character of Eilis Lacey. He only wants to show Eilis as simply a young woman discovering a world she never before knew. (He also showed that the 1950s weren't exactly the idyllic past everyone else depicts it as.)

John Crowley (and writer Nick Hornby) take Toibin's novel and make it into something beautiful. Gorgeously shot by Yves Belanger, superbly cast (especially Saoirse Ronan as Eilis), a beautiful score by Michael Brook...Crowley makes Toibin's novel into something for himself and the end result makes one feel better about the world.

Which of the two is better? Both Toibin's novel and Crowley's film are endearingly charming, it would be almost a crime to pick one over the other. So it appears there's only one logical answer to this.

What's worth checking out?: Both.
Posted by MovieNut14 at 10:17:00 PM
Email ThisBlogThis!Share to TwitterShare to FacebookShare to Pinterest
Labels: book vs. movie, reviews