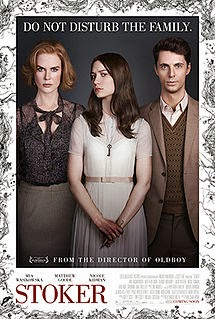 Often times we get films that would make any true cinephile proud. Sometimes it's the aspects of the films, other times it's the allusions to notable films or directors. They're usually small things but they can warrant a smile from some.

One such film that could easily fit this category is Park Chan-wook's Stoker. The concept is a relatively simple one, but Park makes a complex and disturbing yet absolutely gorgeous film. It's arty yet twisted, poetic yet ethereal.

In regards to the aspects of Stoker, there are many elements that make the film just sing. Park's direction, Wentworth Miller's script, Chung-hoon Chung's cinematography, Clint Mansell's score, the performances from Mia Wasikowska, Matthew Goode and Nicole Kidman...everything just works. By themselves, they're great; together, they're phenomenal.

In regards to the allusions, the most obvious ones are those pertaining to Alfred Hitchcock, Shadow of a Doubt and Psycho the more distinct references. (In fact, Goode's role of Uncle Charlie is a nice mesh of Charlie Oakley and Norman Bates.) The color scheme of muted pastels make Stoker look like a depraved Douglas Sirk film. And if it wasn't for certain objects and settings, the film could have easily been set in the 50s or 60s.

Stoker is very different from most other films. It doesn't fit into one specific category, which certainly adds to its appeal. It's simply one of those films that'll leave a different impression on each viewer but the initial reaction will always be the same. What's the reaction? Well, see the film and find out yourself.

My Rating: *****
Posted by MovieNut14 at 10:59:00 PM
Email ThisBlogThis!Share to TwitterShare to FacebookShare to Pinterest
Labels: 2010s, movies, reviews