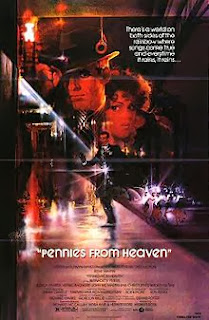 Period pieces are always fascinating to watch, especially if they're set within the last century. Maybe because it's interesting to see a modern perspective on subjects that were very inappropriate to talk about openly in the past. (See Mad Men as an example.)

For a film heavily influenced by musicals from the 1930s, Herbert Ross' Pennies From Heaven is rather...candid in the matter of sex and infidelity. (Certainly not something you'd normally see in a musical regardless of era.) But it's not a film simply about those themes.

Pennies From Heaven focuses on themes of desires and dreams. Bear in mind it's set during the Great Depression, a time in history where people regularly saw their hopes and dreams shatter like glass. Suffice to say it's rather dark for a musical.

Speaking of which, Pennies From Heaven also doesn't follow the standard musical formula. The actors lip-sync the songs rather than actually singing them. (Their tap-dancing is authentic however.) It's certainly a different concept. (Doesn't make the rendition of the title song any less dazzling.)

Anyway, Pennies From Heaven is quite good but it's nothing too spectacular. (Well, okay, there's that sequence.) It's entertaining, yes, but it's really dark for a musical. But all in all, it's not half bad.