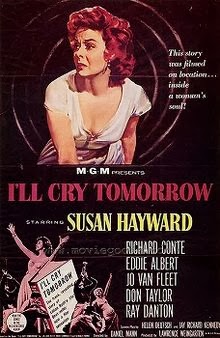 "My life was never my own -- it was charted before I was born." This quote of Lillian Roth's opens Daniel Mann's I'll Cry Tomorrow, and the opening scenes show a young Lillian is under the control of her stage mother Katie (Jo Van Fleet). Years later, Katie sees the errors of her ways, but it's too late for Lillian (Susan Hayward).

The thing about I'll Cry Tomorrow is that it was released in a time when films about addiction were still risky to make. (A contrast to such films nowadays, huh?) The Lost Weekend was released in the previous decade while The Man with the Golden Arm (released the same year as I'll Cry Tomorrow) brought all sorts of controversy. In addition to those two films, I'll Cry Tomorrow showed how addiction could heavily damage one's life rather than today's depiction of it being an unfortunate part of life. (Oh, how the times have changed.)

As with any film about addiction, it's all in the performances. All of the actors featured hold their own, but there's only two that really last. The first is Van Fleet, who effectively steals every scene she's in. (She should have won the Oscar for this instead of East of Eden.) The second is, of course, Hayward. Look at her eyes. Look at them.

There are other aspects of I'll Cry Tomorrow that make the film effective. As well as the performances and Mann's direction, there's also Alex North's score which works really well in particular scenes. (I honestly think North is a rather underrated composer.)

Although not as effective as The Lost Weekend, I'll Cry Tomorrow still has some bite to it. Also, you can't help but think of the later tragedies in Hayward's life when you watch this. (Not exactly life imitating art, but pretty damn close to it.)

My Rating: ****1/2
Posted by MovieNut14 at 4:12:00 PM
Email ThisBlogThis!Share to TwitterShare to FacebookShare to Pinterest
Labels: 1950s, movies, reviews