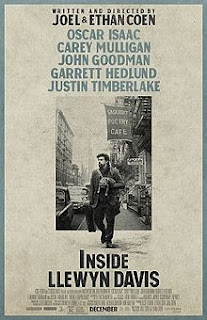 The films of Joel and Ethan Coen frequently feature characters whose lives go from bad to worse and, quite frankly, they deserve it. This is why their new film Inside Llewyn Davis feels so different from the likes of The Big Lebowski and A Serious Man.

How so? The lead character, excellently played by Oscar Isaac, is actually sympathetic amid all of his bad luck. (Then again, Llewyn doesn't complain about his problems every other scene like the protagonists in other Coens films.)

But like other Coens films, there is a wide array of supporting characters throughout Inside Llewyn Davis. They're all have screen time for only a short amount of time but it's what they do during that time that makes their performances last. (Sort of like what Steve McQueen did with 12 Years A Slave.) However, this film is easily Isaac's.

There are other aspects of Inside Llewyn Davis that simply must be mentioned. Along with the Coens' direction and the many performances, there's Bruno Delbonnel's cinematography which makes the film look like photography of the era. And the music. Oh, it will get stuck in your head.