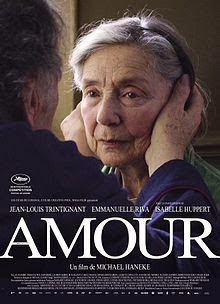 We've all seen films revolving around the young couples in the early stages of their relationships, ranging from minor domestic dramas to full-fledged breakups. But what happens after those rocky early years? Do they stay the same or move on?

Michael Haneke's Amour depicts Georges (Jean-Louis Trintignant) and Anne (Emmanuelle Riva), an elderly couple with many years behind them and not much more ahead. The film shows the slow, quiet decline of Anne and the emotional toll it takes on Georges. (Cheerful stuff, isn't it?)

This is the thing about Haneke. Usually his films are of the disturbing variety. (Seriously, The Piano Teacher gets creepy every five minutes.) So seeing a film of his that's actually human is a shock. A very, very depressing shock.

But like many of Haneke's other films, it's the performances that make the film last. Trintignant and Riva, both acclaimed veterans of French cinema, are simply brilliant here. Riva showcases talent that clearly shows her longevity as an actress. Trintignant in turn displays a silent understanding throughout the film as Georges witnesses the mental decay of Anne. Heavy performances from a heavy film.

Amour is not an easy film to watch. (Then again, considering who the director is...) The sheer fact that you might have witnessed similar events in your own life makes the film even more devastating. It's simply heartbreaking.