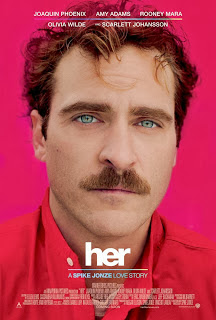 The problem with modern romance films is that everything's been done already. It's the same formula for every one. How do you do a romance film that follows the formula but is still a fresh concept?

Spike Jonze answers that question in the form of his new film Her. The film follows the familiar formula but Jonze throws in a little twist. What is it? One half of the main couple is the voice for an OS.

It sounds like an odd concept, certainly, but Jonze provides perhaps one of the most honest films in God knows how long. We've seen so many films that feature backstabbing and lying to the point where when romance gets brought up, it's practically impossible. (Or it feels artificial, depending on the film.) But with Her, it's practically a relief to see characters being truthful and open with one another.

And the performances are great. Rooney Mara, Chris Pratt and Olivia Wilde make the most of their limited screentime. Amy Adams plays the role of the quiet, understanding friend beautifully. And now we get to the true stars of Her: Joaquin Phoenix and Scarlett Johansson. Johansson plays her role wonderfully, proof that she's very capable of giving a great performance with just her voice. And I absolutely love the complete 180 Phoenix did from this and The Master. Such a lovely, vulnerable performance here.

There have only been two films I've seen that I can easily sum up in one word. The films in question are The Apartment and Her. And the word? Perfect.