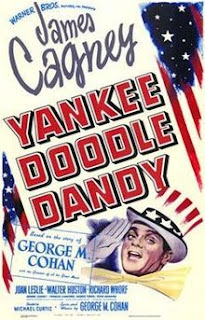 There's something really enjoyable about seeing an actor playing against type, whether it's a good guy playing bad (Henry Fonda in Once Upon a Time in the West) or a comedian going straight (Bill Murray in Lost in Translation).

Now James Cagney, as we all know, is renown for playing the street smart tough guy. So what's he doing in a movie where he's portraying song-and-dance man George M. Cohan? Simple: blowing away that tough guy status in a way more effective than a hail of bullets. I have to admit I was reluctant to see him in a role like this but once I saw the energy he had on-screen, I almost completely forgot about his earlier work.

Song and dance aside, Cagney's role of Cohan is a departure personality-wise from earlier roles like The Public Enemy's Tom Powers or The Roaring Twenties' Eddie Bartlett. Powers and Bartlett are both short-tempered and go by their own rules; Cohan is optimistic and flexible (figuratively and literally).

There is a scene in Yankee Doodle Dandy that really got to me. As Cohan tries to talk to his dying father, he drops his head, unable to speak knowing that this is the last time he'll be able to talk to him. A scene like this can make an actor go over the top with emotions. Not Cagney. He gives the scene the right mixture of believability and heartache.

So did Cagney deserve that Oscar for Yankee Doodle Dandy? Indeed he did. His work is probably one of those rare performances that actually deserved the award. As for the rest of the movie, it's a very well done musical biopic.