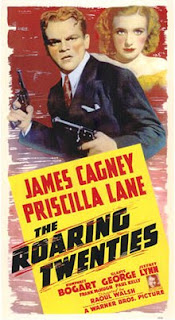 The two most notable names for "old school tough guys" are James Cagney and Humphrey Bogart. You mess with them, there's no guarantee you're coming out unscathed.

Upon returning home from serving in World War I, Eddie Bartlett (Cagney) struggles to find a job. Soon he finds one where the money just pours in: bootlegging. Along with war pals George Hally (Bogart) and Lloyd Hart (Jeffrey Lynn), Eddie rises to the top of the criminal underworld.

Like I said, you don't mess with Cagney or Bogart. That is clearly shown in The Roaring Twenties. It's one of those movies that managed to define an entire genre. It also managed to stand the test of time. Hey, if you don't believe me, watch it yourself.