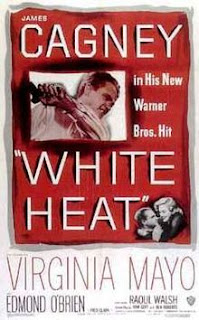 I think I'm going to be on a James Cagney kick for a while. Well, what do you expect from a gal who's a sucker for gangster flicks?

Cody Jarrett (Cagney) is a criminal who goes by his own twisted rules. After landing in prison, the police use Vic Pardo (Edmond O'Brien) as a means to find out the location of the money Jarrett and his gang stole from a train.