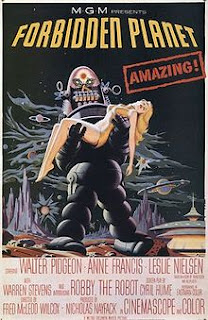 Science fiction was a big thing in the 1950's. Some would make clear cut references to communists and the Cold War. Others would just provide entertainment.

Forbidden Planet is a loose adaptation of Shakespeare's The Tempest. It has the recently deceased Leslie Nielsen and Anne Francis as major members of the cast.

Not long after landing on a planet only inhibited by a recluse and his daughter, crew members of a spaceship are attacked by an unknown creature.

Once we learn about this creature, we become more interested into why it's attacking the spaceship crew members and later on the recluse and his daughter. Why is it?

So what did I think of Forbidden Planet? To tell you the truth, I felt a little underwhelmed. I was expecting a little more out of it. But I did get entertained (though seeing a young Leslie Nielsen almost gave me a heart attack). The electronic score was a little more creepy than sci-fi sounding if you ask me. It's typical 50's kitsch, but I liked it.

My Rating: ****
Posted by MovieNut14 at 7:27:00 PM
Email ThisBlogThis!Share to TwitterShare to FacebookShare to Pinterest
Labels: 1950s, movies, reviews