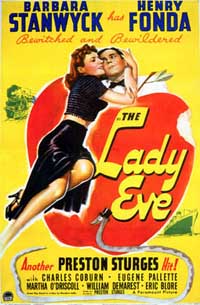 Henry Fonda is known for playing the good guy. Famous for his roles in The Grapes of Wrath and 12 Angry Men, he also got noticed for his against-type role in Once Upon a Time in the West. But he's always known for being the good guy.

Con woman Jean Harrington (Barbara Stanwyck) sets her sights on her next target: the rich but unsophisticated Charles Pike (Fonda). Only problem is she falls in love with him.

There's a certain saying that fits Pike: "There's a sucker born every minute." Wow, he falls for Jean and her ploys hook, line and sinker. And Fonda just fits that role. Stanwyck actually reminded me of her later work in Double Indemnity as the cunning dame. It doesn't mean I don't like it; it shows that Stanwyck is skilled with that type of role. All in all, I very much enjoyed The Lady Eve.