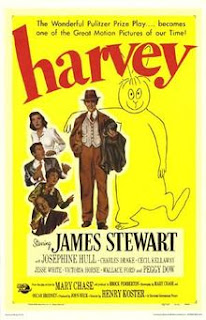 Jimmy Stewart is always an enjoyable actor to watch. He has worked with notable directors such as Frank Capra, Alfred Hitchcock, George Cukor and Otto Preminger, each time he played the likable leading man (well, maybe not for Vertigo).

Elwood P. Dowd (Stewart) is a mild-mannered man who has conversations with a 6'3" pooka named Harvey. Elwood's sister Veta (Josephine Hull) is fed up with hearing about Harvey and plans to have him committed.

What better way to start my movie watching for 2011 than with a movie like Harvey? Stewart, like I said in the intro, is a joy to watch. His performance in Harvey gets up there with his work in Mr. Smith Goes to Washington as a favorite. Hull also gives an enjoyable performance. In short, I just adored Harvey. It had me smiling long after it was over.