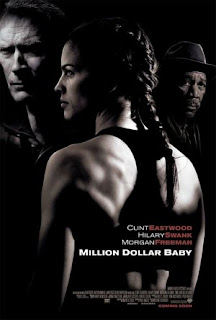 I'll admit I haven't seen that many Best Picture winners. I've only seen eighteen of the eighty-one (soon to be eighty-two) winners, fourteen of them I saw last year. I am pleased by most of the winners, but not all.

Maggie Fitzgerald (Hilary Swank) is an aspiring boxer who wants to be trained by Frankie Dunn (Clint Eastwood). But every time she asks, she gets the same gruff response: "I don't train girls." After finding out she's been secretly trained by Eddie "Scrap-Iron" Dupris (Morgan Freeman), a friend of his, Dunn decides to give her a chance, causing his hard outer shell to soften up a bit.

Milion Dollar Baby definitely has its good moments, particularly the performances from Eastwood, Swank and Freeman. It's the final parts of the movie that made me reconsider rewatching it again. But overall, it delivers.