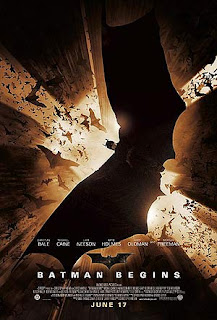 I find this really ironic. I vowed to never watch any movies with a "following". Y'know, "fanboy" movies. And yet as of today I have seen all four Indiana Jones movies, the original Star Wars trilogy, Iron Man and four Batman movies. So much for that promise. In other words, I'm a fangirl.
As a young boy, Bruce Wayne develops a fear of bats and witnesses his parents' murders. Now an adult, Bruce (Christian Bale) has gone through martial arts training under the watchful eye of Henri Ducard (Liam Neeson). Upon returning to Gotham City, he finds it has fallen victim to crime boss Carmine Falcone (Tom Wilkinson) and psychiatrist Jonathan Crane/The Scarecrow (Cillian Murphy).
Boy, I can imagine the reactions when Warner Bros. announced they were reviving the Batman franchise. For those that remember, Joel Schumacher's take on the superhero wasn't that...super. And the fact it was going to be directed by a semi-unknown from England? That probably made fans of the Caped Crusader go into hysterics. And chances are they were shut up for good once they saw the movie.
Boy, Batman Begins sure has a helluva cast. I mean, you have Christian Bale, Michael Caine, Gary Oldman, Morgan Freeman, Katie Holmes (I'll agree she wasn't that good), Liam Neeson and Tom Wilkinson, all in one freakin' awesome movie.