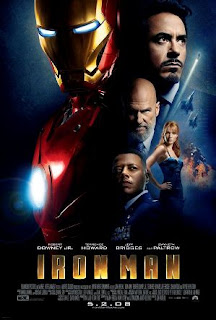 As I stated in my reviews of Once Upon a Time in the West and Batman Begins, I'm not a normal kinda gal. I prefer guy movies and occasionally a movie with a following. Iron Man is such a movie.

Billionaire industrialist Tony Stark (Robert Downey, Jr.) is held hostage by a terrorist group in Afghanistan. While being held captive, he builds a crude suit of iron armor which helps him escape. After his return to the States, he announces that Stark Industries will no longer make weapons, much to the dismay of his business partner Obadiah Stane (Jeff Bridges). But Stane has other plans...

Personally, I think casting Robert Downey, Jr. as Tony Stark was GENIUS. I mean, Stark has some serious flaws and Downey, who at the time was still trying to make a comeback, fits the bill perfectly. Along with a strong supporting cast that includes Gwyneth Paltrow, Jeff Bridges and Terrence Howard, Iron Man definitely delivers with good acting and kick-ass action.

My Rating: ****
Posted by MovieNut14 at 7:55:00 PM
Email ThisBlogThis!Share to TwitterShare to FacebookShare to Pinterest
Labels: 2000s, movies, reviews