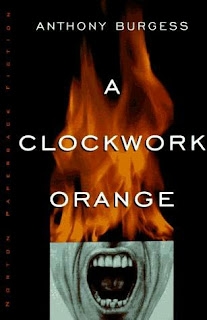 I find it weird when a book I've read is considered "controversial". Even more so if it's controversial for a small reason. (The Catcher in the Rye? Really?) But some are very clear on why they have controversy. Case in point, I'm reviewing A Clockwork Orange.
Fifteen-year-old Alex and his "droogs" are typical teenagers; they rape, plunder and beat up anyone in their sights. When Alex is arrested for murdering an old woman, he is sent to prison. After killing an inmate, Alex becomes the test subject of a new rehabilitation method. Upon his release, he is completely unprepared for what comes to him next.

If you've read an earlier post I did, you know this book scared the hell out of me. Why it does, I don't know. But, damn, Anthony Burgess' writing sure left an impact on me.

My Rating: ****
Posted by MovieNut14 at 5:47:00 PM
Email ThisBlogThis!Share to TwitterShare to FacebookShare to Pinterest
Labels: books, reviews