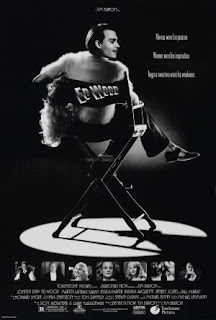 When Ed Wood was released on October 7, 1994, critics lauded it, while audiences ignored it, making it Tim Burton's best reviewed movie of his career and his first box-office bomb.

Ed Wood is a biopic on Edward D. Wood, Jr. (Johnny Depp), claimed "the worst director of all time". It also focuses on Wood's friendship with an aging Bela Lugosi (Martin Landau) and Wood's cross-dressing habit.

I don't think I've ever since such an optimistic character like Ed Wood, particularly in one scene at the beginning of the movie. Ed brings a review of his play for the actors to read. Despite the fact that the review is mostly negative, Ed points out that the reviewer said the costumes were very realistic. You gotta love a guy like Ed.

My Rating: ****1/2
Posted by MovieNut14 at 10:20:00 AM
Email ThisBlogThis!Share to TwitterShare to FacebookShare to Pinterest
Labels: 1990s, director: Tim Burton, movies, reviews