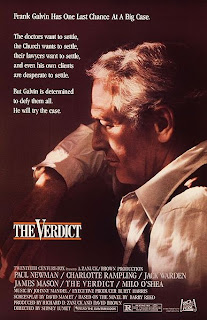 With today marking the one-year anniversary of his death, I thought it would be appropriate to review one of Paul Newman's movies.

Newman plays Frank Galvin, a washed-up alcoholic lawyer. His firm isn't doing so well; he has lost four cases in the last three years, and he stooped to ambulance chasing. His friend Mickey (Jack Warden) shows him a medical malpractice case involving a woman who's in a coma after a botched surgery. The original plan was to give the family a settlement outside of court, but after seeing the woman Galvin decides to take on the case.

Sidney Lumet, as I've mentioned before, is a very skilled director. Even though The Verdict came out 25 years after 12 Angry Men, Lumet clearly shows he still knows how to direct a courtroom drama.

Now mind you, I've only seen three movies with Paul Newman in them (Butch Cassidy and the Sundance Kid, The Verdict and Road to Perdition), but Newman delivers one of the best performances of his career in The Verdict.

Suggestion: Watch this as a double feature with 12 Angry Men.