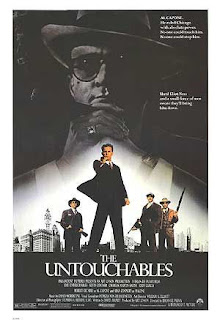 Usually members of the Academy of Motion Picture Arts and Sciences (AMPAS), better known as the Oscars, are suckers for gangster movies (i.e., The Godfather, Goodfellas, The Departed). The Untouchables is definitely one of those movies. Garnering four Oscar nominations and winning one for Best Supporting Actor, The Untouchables is a notable movie from director Brian De Palma.

Eliot Ness (Kevin Costner) is in charge of bringing down the power of gang leader Al Capone (Robert De Niro). Finding that doing such a task by himself is a challenge, he gains help from Irish cop Jim Malone (Sean Connery), police trainee George Stone (Andy Garcia) and accountant Oscar Wallace (Charles Martin Smith). Together, they take down Capone's power over the city of Chicago.

De Niro definitely nailed the role of Al Capone. Anyone that has seen his earlier work in The Godfather Part II can agree with me.