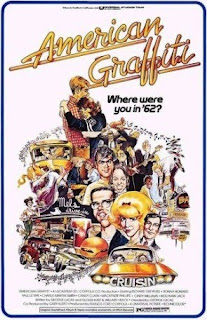 Basically everybody knows who George Lucas is. But a lot of people don't know what Lucas did before Star Wars.
American Graffiti focuses on four teenagers that graduated from high school, and are starting new lives.
Curt Henderson (Richard Dreyfuss) and Steve Bolander (Ron Howard) both got accepted by the same college, but Curt's having second thoughts on going. Steve's girlfriend and Curt's younger sister Laurie (Cindy Williams) is also unsure of Steve leaving, but Steve assures her of his departure, claiming that seeing other people will strengthen their relationship. Curt, Laurie, and Steve head off to the freshman Sock Hop, but while cruising, Curt sees a blonde (Suzanne Somers) in a white Thunderbird who mouths "I love you", then drives away. That soon becomes Curt's mission.
Terry "The Toad" Fields (Charles Martin Smith) gets to watch over Steve's ‘58 Chevy Impala for the night and while Steve's at college. He soon picks up a girl named Debbie Dunham (Candy Clark). Thinking that it's his car, she's convinced that Terry's a smart kid. Smart enough to get a bottle of whiskey while being underage. Later, however, Steve's car gets stolen.
John Milner (Paul De Mat) is a rebel who owns a yellow deuce coupe. He gets tricked into watching over a young girl named Carol Morrison (Mackenzie Phillips). At the beginning, they don't get along, but after trashing someone else's car, they become friends. John's continually provoked by Bob Falfa (Harrison Ford), a street racer.

I really enjoyed American Graffiti. I kept forgetting that Lucas directed it, despite the fact I saw this before the original Star Wars trilogy.