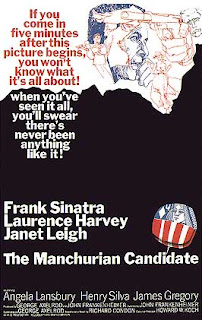 When the 1960's began, the Cold War was still going on and most people were anti-Communist. Apparently, Hollywood starting hitting close to home with movies like The Manchurian Candidate.

During the Korean War, a platoon of American soldiers is captured by Communists. A year later, the platoon escapes and returns to the United States where Staff Sergeant Raymond Shaw (Laurence Harvey) receives the Medal of Honor for his actions. However, one of Shaw's fellow soldiers, Major Bennett Marco (Frank Sinatra), finds all of this peculiar and tries to find out what's going on.

Harvey and Sinatra's performances in the movie were definitely Oscar worthy, but it was the only Oscar-nominated performance in the movie was Angela Lansbury's sinister role as Shaw's mother. And, boy, she earned that nomination. I don't think I've ever since a person that cold-hearted. Well, not since I saw The Godfather Part II.

My Rating: *****
Posted by MovieNut14 at 10:25:00 AM
Email ThisBlogThis!Share to TwitterShare to FacebookShare to Pinterest
Labels: 1960s, director: John Frankenheimer, movies, reviews