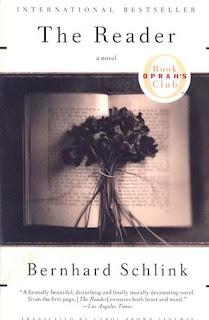 Most people know Bernhard Schlink's novel a little better now since Stephen Daldry's film adaptation came out last year, especially since the movie earned Kate Winslet her overdue Oscar. Anyway, back to the book. I managed to finish it in one day because it was very gripping (but that's the last time I stay up that late to finish a book).

The book is set during late-1950's Germany and the lead is 15-year-old Michael Berg who becomes ill on his way home. 36-year-old tram conductress Hanna Schmitz notices him, cleans him up and sends him on his way. Months later after fighting hepatitis, he visits Hanna to thank her for her help, only to realize he's attracted to her. He visits her again days later and she seduces him, which leads to a secret affair. After months of dating, Hanna disappears without a trace.
Years had passed and Michael is in law school. He attends a trail where women who served as SS guards at a Auschwitz satellite are being tried for allowing 300 Jewish women to die in a fire inside a bombed church during camp evacuation. Much to Michael's surprise, Hanna is one the defendants and he discovers a secret Hanna has been hiding from him.

As I mentioned on my first post, this was one of my favorite books. I liked how it was told from Michael's point of view because you feel his pain when he discovers Hanna's on trial. The romance of Michael and Hanna is very romantic.

My Rating: ****
Posted by MovieNut14 at 6:41:00 PM
Email ThisBlogThis!Share to TwitterShare to FacebookShare to Pinterest
Labels: books, reviews