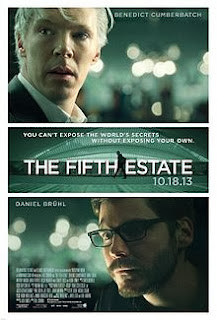 It's always hard for a director to bounce back after a fall from grace whether it be in their professional or personal lives. Bill Condon, for instance, wowed audiences and critics with films like Gods and Monsters and Kinsey. Now that once-glowing resume is tarnished with him directing not one but two of the Twilight movies. Does he redeem himself with his new film The Fifth Estate?

Well, yes and no. Yes because the film proved he still had it in him. No because upon seeing it, I'm not sure if Condon was right for the film. I mean, on the one hand this isn't the first time Condon made a film about a controversial figure. But on the other hand, the mood of the film feels off throughout. (I would also make a few tweaks to Josh Singer's script.)

Though Condon did get a rather impressive roster of actors for his film. Among the supporting actors are David Thewlis, Laura Linney, Stanley Tucci, Anthony Mackie, Alicia Viklander, Carice van Houten, Peter Capaldi and Dan Stevens. They all make the most of their limited screentime, but they all pale in comparison to the two leading men.

Those two leading men are Benedict Cumberbatch and Daniel Bruhl, both of whom were recently recognized for their supporting work in Star Trek Into Darkness and Rush respectively. They don't play martyrs with a cause but rather men that think what they're doing is for the greater good. (Yes and no in that regard.) Suffice to say they're both very good in their roles, but Cumberbatch in particular deserves a mention.

The Fifth Estate is by no means a bad film as a majority of certain bloggers are making it to be. That said, however, it does have its flaws. All the pieces are there, just not put together properly. Though if I wanted a film about leaked secrets and it featured Cumberbatch, I'd just stick with Tinker Tailor Soldier Spy.