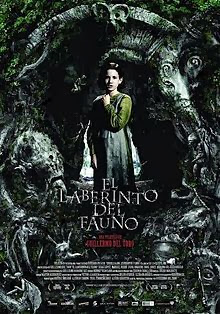 Guillermo del Toro is one of those directors working today whose visions are truly one of a kind. None can compare to the fantastic creatures and world from del Toro's mind. (That, um, rhyme wasn't intentional, I swear.)

And what better film proves that than Pan's Labyrinth? Blending the horrors of reality with the fascination of fantasy, the film showcases the dream-like and nightmare-fueled perspective of a young child. (That aspect alone makes the film even more terrifying in parts.)

In a way, Pan's Labyrinth is del Toro's twisted variation of Alice in Wonderland. A girl falling into a world of make-believe which is almost as dangerous as the world she lives in? Yep, sounds like something from the mind of Lewis Carroll.

But it's not just del Toro's story that makes Pan's Labyrinth so mesmerizing. It's also the many visual accompaniments as well. There's David Marti and Montse Ribe's makeup which is solid proof as to why CGI is somewhat pointless (and also deservedly won an Oscar). There's also Guillermo Navarro's cinematography which embodies the difference between the two worlds (and also deservedly won an Oscar). And I also must mention Javier Navarrete's Oscar-nominated score, all the creepy gorgeousness of it.

You've probably heard enough people tell you to see this. Well, here's another person telling you to see Pan's Labyrinth. Seriously, what more do you need to prove you're missing out on one of the best films of the last decade? (Besides that, I mean.) Honestly, go!