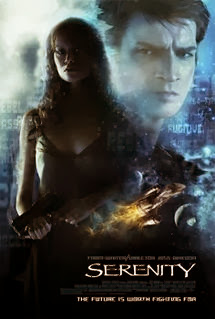 It always seems risky to release a movie based on a TV show, especially if it's a show that wasn't on the air for very long. (Well, I suppose it's better than the other way around.)

Yet Joss Whedon's Serenity doesn't feel like any of those other movies. (Maybe because Whedon is behind it.) Following where Firefly left off, the movies shows what's going on with the crew of Serenity. (Hint: it's not very peaceful.)

I had only finished Firefly recently so I can safely say Whedon wrapped up what the unjustly cancelled TV show left hanging very neatly. (That's more than I can say for some shows in general.) Indeed there were many elements from Firefly passed into the movie, but I feel there were some aspects Whedon was clearly saving for when he had a bigger budget.

Of course the stars of Firefly reprise their roles for Serenity but the movie has an added bonus of Chiwetel Ejiofor as the main villain. Ejiofor, who's recently been earning deserved praises for 12 Years A Slave, plays cool and collected like nobody's business and it's awesome. (On a different note, how is Nathan Fillion not more popular?)

Anyway, I really enjoyed Serenity. I'm not sure if it's as accessible to non-Firefly viewers but knowing Whedon, I have a feeling it might be. (Though there are some moments that are pure Whedon. You know which ones if you've seen Serenity.) If you want to see this, I suggest checking out Firefly first.

My Rating: ****
Posted by MovieNut14 at 9:57:00 PM
Email ThisBlogThis!Share to TwitterShare to FacebookShare to Pinterest
Labels: 2000s, movies, reviews