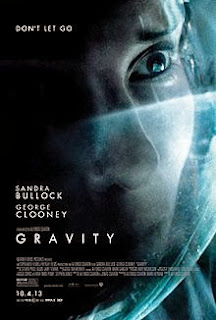 "In space, no one can hear you scream." That's the famed tagline for Alien. It's also an apt tagline for Alfonso Cuaron's Gravity. After all, it's about surviving in the unsurvivable.

Cuaron is no stranger to the sci-fi genre. His last film Children of Men featured an unbelievably bleak dystopia that would rival anything Orwell wrote. With Gravity, Cuaron (which he co-wrote with his son) condenses the scale to a much smaller degree and amps up the terror.

Remember when it was announced that Sandra Bullock would be in Gravity and the internet let out a collective "WHAT?!" I wonder if those same people ate their words when they actually saw Gravity. I myself am not very well versed with Bullock's work but I can safely assume that this is her best work.

Apparently it's now a trend to release a film you simply must see in 3D. (Not complaining, mind you. Just a small thing I noticed.) Like what Robert Richardson and Claudio Miranda did with Hugo and Life of Pi respectively, Emmanuel Lubezki takes a predominately CGI film and turns it into art. (Especially when coupled with Steven Price's chilling score.)

Gravity is honestly one of those films that gets into your mind and you can't stop thinking about it. Thanks to the glorious combination that is Cuaron, Bullock, Lubezki and Price, Gravity may very well be up there as one of the best science fiction films ever made.