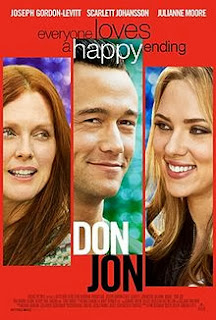 Joseph Gordon-Levitt is certainly one of the more popular young actors working today. Even though he's been a familiar face since his days on 3rd Rock from the Sun and has done a multitude of roles, it's what he's done in the last few years that garnered him recognition.

Now he's directed a film! With his directing debut Don Jon, Gordon-Levitt shows his audience what kind of society we're a part of whether you've noticed it before or not. (I'm aware of this society, and I'm not fond of it.)

And Gordon-Levitt got some pretty good actors for his film. Along with himself as the title character, he also enlists the likes of Scarlett Johansson, Julianne Moore and Tony Danza in supporting roles. And boy, they're all deliver top notch performances.

Don Jon is a good satire on what the media has us think love is supposed to be, but I came away a touch unsatisfied. Maybe I was expecting too much out of it (most likely), I don't know. Still, I enjoyed seeing Gordon-Levitt step behind the camera.

My Rating: ****
Posted by MovieNut14 at 11:31:00 PM
Email ThisBlogThis!Share to TwitterShare to FacebookShare to Pinterest
Labels: 2010s, movies, reviews