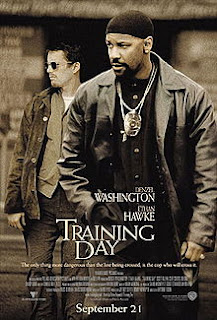 From the first interaction between Alonzo Harris (Denzel Washington) and Jake Hoyt (Ethan Hawke), one can tell of the clear differences between them. Hoyt follows the rules he was taught by the police while Harris follows his own rules with a vengeance. It's still detectable throughout the rest of the film.

Harris is clearly someone who let the power of the badge go straight to his head. He feels because he's the law, he can act above it. It isn't the first time a dirty cop has been the primary focus in a film, but Washington breathes new life into the role. Gotta love the sight of the devil in his eyes.

Hoyt however doesn't let such a thing happen to him. In fact, it's very possible he never saw such behavior before. He may let Harris be a bad influence for a while, but at least he knows when he's gone too far. Good trying to overcome evil, a battle persistent throughout the film.

Antoine Fuqua paints a portrait of Los Angeles life, full of bullets and blood. It isn't as stylized as what Michael Mann presented with Heat or Collateral though one could view Training Day as the city's true nature. Either way, it's the kind of world you don't want to get near.

Training Day is good, but it glorifies gang life too much. Washington is great as with Hawke. Fuqua presents a tale of right and wrong within the law, one that is all too hard to avoid.

My Rating: ****
Posted by MovieNut14 at 7:37:00 PM
Email ThisBlogThis!Share to TwitterShare to FacebookShare to Pinterest
Labels: 2000s, movies, reviews