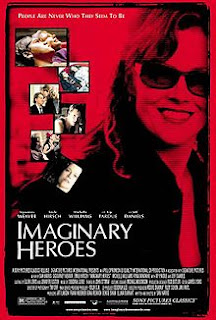 When there's a death in the family, the ways of coping vary from person to person. This is the case with the Travis family following the suicide of son Matt (Kip Pardue) in Dan Harris' Imaginary Heroes.

Matt's death hits the hardest on father Ben (Jeff Daniels). He was so proud of his Matt's accomplishments, so he would be the one having the most difficulty accepting his death. In fact, it's even harder for him to connect with his other kids Tim (Emile Hirsch) and Penny (Michelle Williams).

Mother Sandy (Sigourney Weaver) also takes the news hard, though not as much as Ben. She clearly has a lot else on her mind, but it isn't specified until much later. Her means of coping are different than most. What does she do? Marijuana.

Tim, although he found the body, takes the news with ease. Yet he appears troubled. Like most teenagers, he tries to escape reality with drugs and alcohol, but even those don't help. He feels out of place in the world he inhabits, trying to find where he belongs.

Imaginary Heroes is a good film, but it's not without its flaws. Harris makes Ben too much of a melodramatic figure. The film should have strictly focused on Sandy and Tim. Also, it feels as though Harris tried to cram every cliche about coping in his film. On the plus side, Weaver and Hirsch do wonders with what little their parts offer. And the third act definitely makes up for the lagging first two. In short, Imaginary Heroes isn't bad but it could have been greatly improved.

My Rating: ****
Posted by MovieNut14 at 1:33:00 PM
Email ThisBlogThis!Share to TwitterShare to FacebookShare to Pinterest
Labels: 2000s, movies, reviews