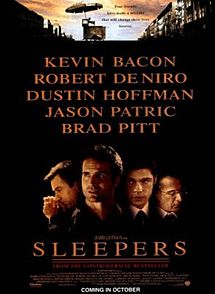 Barry Levinson's Sleepers is one of those films that may be hard to watch, depending on the person. Still, Levinson makes sure that the film sticks in the viewer's mind.

Sleepers opens with the introduction of Lorenzo "Shakes" Carcaterra (Joe Perrino), Michael Sullivan (Brad Renfro), Tommy Marcano (Jonathan Tucker) and John Reilly (Geoffrey Wigdor), our four protagonists from Hell's Kitchen. After a prank goes horribly wrong, they're sent off to a juvenile facility where it's a living hell.

Years pass. Shakes (Jason Patric) works for a newspaper. Michael (Brad Pitt) is a lawyer assigned to prosecute Tommy (Billy Crudup) and John (Ron Eldard), both on trial for murder. (Not their first time in the courtroom either.) It's a battle of morals for them and those watching the case.

As with most criminology cases, understanding the motives behind the crime is key. One crucial reason for why criminals do what they do is what happened in their childhoods. The more abuse they endured, the more severe their crimes will become. This can most definitely be applied to Tommy and John.

As mentioned above, Sleepers really stick in your mind once the credits start to roll. The performances are great, especially a very menacing turn from Kevin Bacon. (How he still doesn't have an Oscar nomination is anyone's guess.) Also, I love the look in Patric, Pitt, Crudup and Eldard's eyes expressing the damaged souls within them.