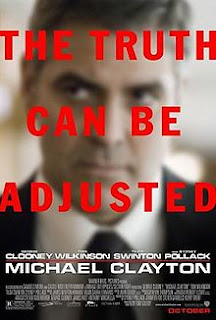 Tony Gilroy's Michael Clayton opens with a manic rambling by Arthur Edens (Ton Wilkinson). At first, it sounds as though this man needs treatment. In reality, there's more to this story.

Michael Clayton (George Clooney) is hired to keep Arthur in line as a lawsuit is underway. (Arthur is the lead attorney in the case.) As Arthur starts to mentally unravel more, details behind the case start to bubble up to the surface.

Michael and Arthur are very interesting people to watch in the way of how their minds function, but it's next to impossible to take your eyes away when Karen Crowder (Tilda Swinton) is present. Her mind works in very calculating ways yet her face remains frigid. It's a hell of a performance from Swinton. No surprise on how she won.

The star of Michael Clayton isn't Clooney, nor is it Wilkinson or Swinton. It is Gilroy's script, calculating like the principal characters. It's as cunning as anything this side of a John Frankenheimer or Sidney Lumet film. You don't find those very often nowadays.

Michael Clayton is damn good, there's no denying that. Everything just manages to blend together excellently. (Take note that "perfectly" wasn't used.) It definitely ranks up there as one of the best films of the last decade.

My Rating: ****1/2
Posted by MovieNut14 at 6:01:00 PM
Email ThisBlogThis!Share to TwitterShare to FacebookShare to Pinterest
Labels: 2000s, movies, reviews